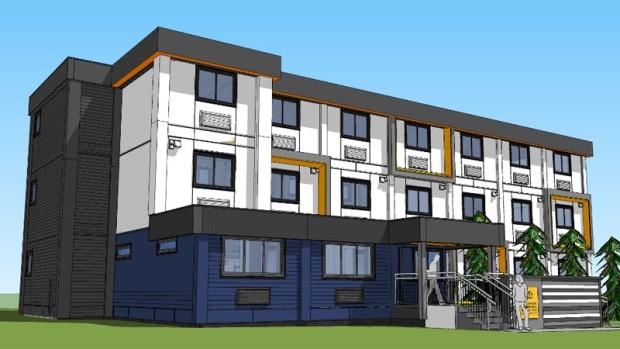 An artist’s rendering of the modular housing on Powell Street in Vancouver.

The City of Vancouver’s director of planning development has approved a permit to start construction of temporary modular housing on Powell Street.

The site will be home to 39 units of housing for women in the Downtown Eastside. It will be overseen by Atira Women’s Resource Society.

Each new home will be approximately 250 square feet and contain a bathroom and kitchen. Seven units will be fully wheelchair accessible. The building will also include amenity space and a communal kitchen, laundry facilities, a staff room, an office and meeting rooms for the staff and residents to use.

The City of Vancouver anticipates construction will start in early March and the building will open in May.

These homes at 525 Powell St., formerly 501 Powell St., are all part of a $66-million commitment from the B.C. government toward building 600 new units of temporary modular housing across Vancouver.

In a statement, Housing Minister Selina Robinson said, “We cannot pretend homelessness will solve itself or disappear from sight, and sit idly by while people struggle to live for months on end in the snow and the rain.”

-With files from Michelle Morton, CKNW