In The Press: Jones Distilling

In The Press: Jones Distilling

A craft distillery producing premium spirits, a restaurant, and a medical centre — that’s what is in store for the iconic 102-year-old Mountain View School building if a heritage revitalization agreement application is submitted and approved by Revelstoke City Council. 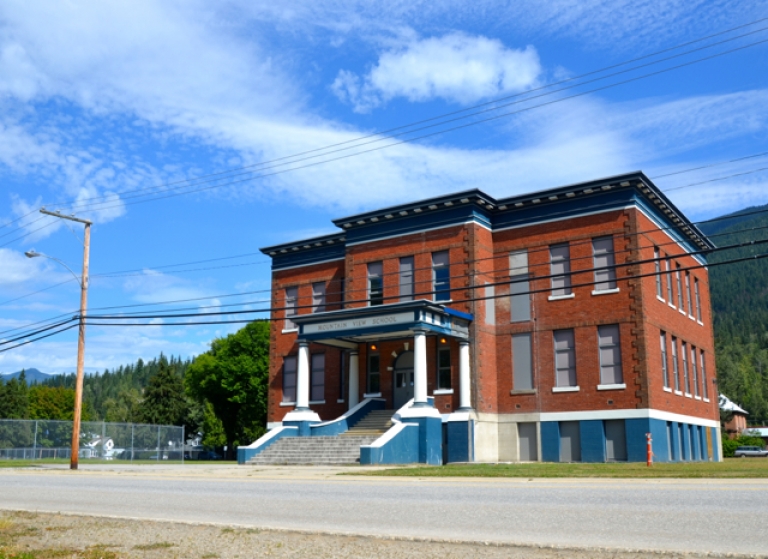 Revelstoke’s distinctive old Mountain View School was built in 1914. Now plans are for it to be turned into a craft distillery among other uses. Photo: Emily Kemp/Revelstoke Mountaineer

The Mountain View Elementary school has sat vacant since 2012, but plans for new life to be breathed into it, in the form of a craft distillery, medical centre and restaurant, have begun.

We first heard about the potential new Revelstoke craft distillery, Jones Distilling, back in January this year, when an application to update the zoning bylaw of the Mount Begbie Brewing Co. premises on First Street went through city council.

The man behind the company, Gareth Jones, is moving his family to Revelstoke from Salmon Arm. His earlier plans to take over the old Mount Begbie Brewing Co.’s have changed with this surprise move towards the old school. 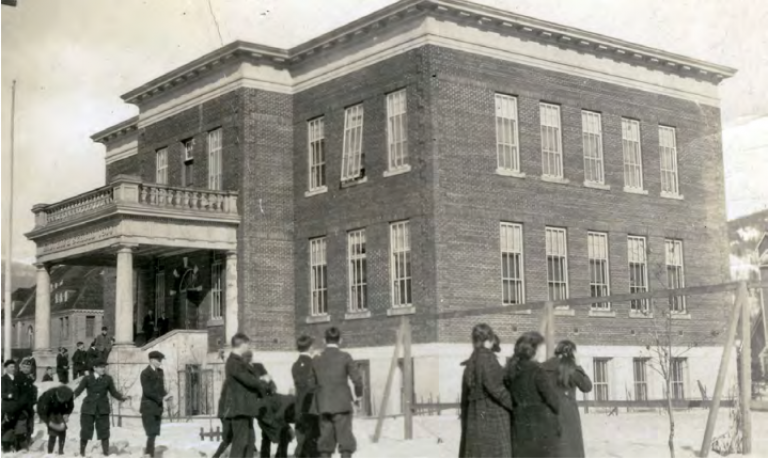 Mountain View School was built in 1914 but vacated in 2012 due to a plan to consolidate schools and properties in School District 19. The district has been looking for a caretaker ever since and after two unsuccessful request for proposals, they again went through the process this year.

“The successful proponent will recognize the historical importance of the 1914 Mountain View School Building and must be prepared to commit the necessary resources for its adaptive reuse,” the district’s ad read.

After submissions closed on June 15, Jones was picked and he entered into a conditional agreement of purchase and sale. The 2015 BC Assessment Authority’s property assessment valued the Mountain View land site at $2,290,800, but its not known what the final sale price was worked out to be. 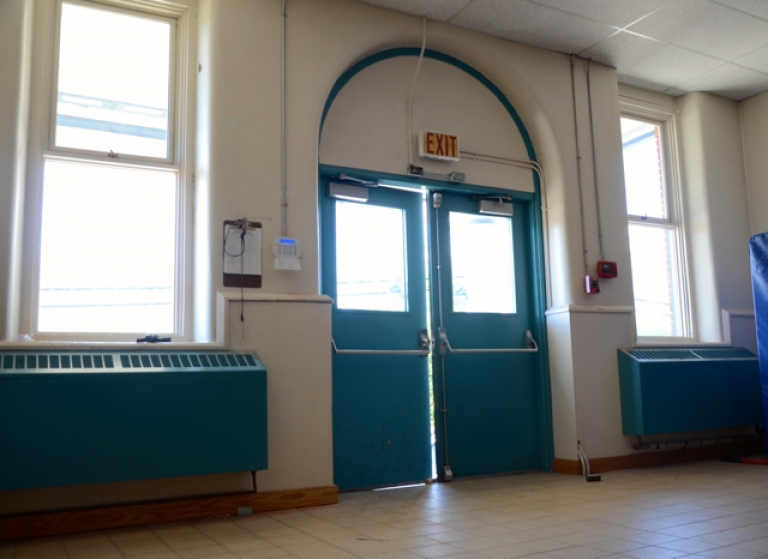 The old Mountain View Building will be a lengthy renovation making the most of its institutional neoclassical architecture. Photo: Emily Kemp/Revelstoke Mountaineer

Jones’ ambitious ideas and purchase of this three-level building rest on the approval of a Heritage Revitalization Agreement (HRA) through Revelstoke City Council. Currently the lot on 616 Third Street West is zoned P3 — Institutional and the building was heritage listed last year.

A HRA is a flexible zone that can include a variety of uses such as commercial and residential. Due to the flexible nature of the zone, changes that would not permitted in other zoning districts, such as setbacks, can be updated to suit the current proposal.

Revelstoke City’s manager of development services Dean Strachan said the flexibility of this special zone recognizes that heritage sites are often not built for the purpose that they will be used for in modern times.

“It’s another tool to make heritage properties viable for new uses,” he said. “They’re quite often expensive properties to maintain and upgrade.
“Any incentive you can create to protect those properties and create them into something new to have a longer life, is great. Especially if they’re going to invest in the rehabilitation and reinvigoration of those buildings.” 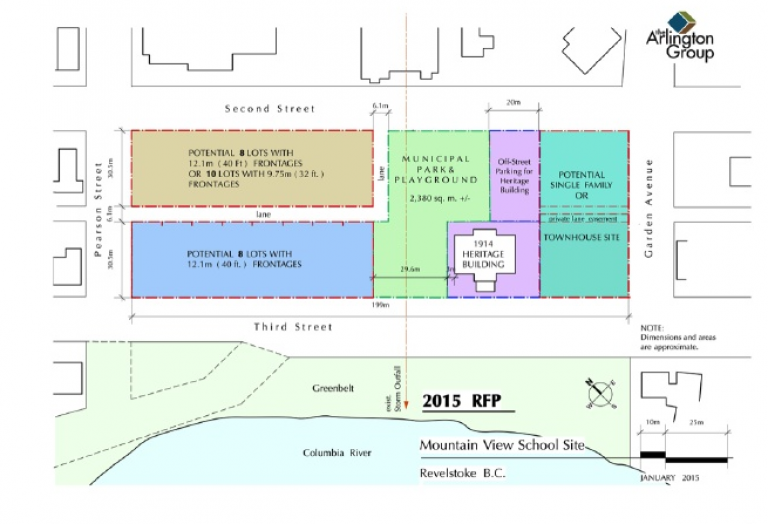 Jones’ purchase will include some of the land surrounding the building, which he plans to use for a parking lot. The rest of the lot — currently parkland and a playground — will still be in the hands of the school district to sell and be developed. Previous open houses to discuss the site have always veered towards residential lots for the surrounding property.

Part of the council process of a HRA will include a public hearing, allowing the public to weigh in on Jones’ requested uses of the building. 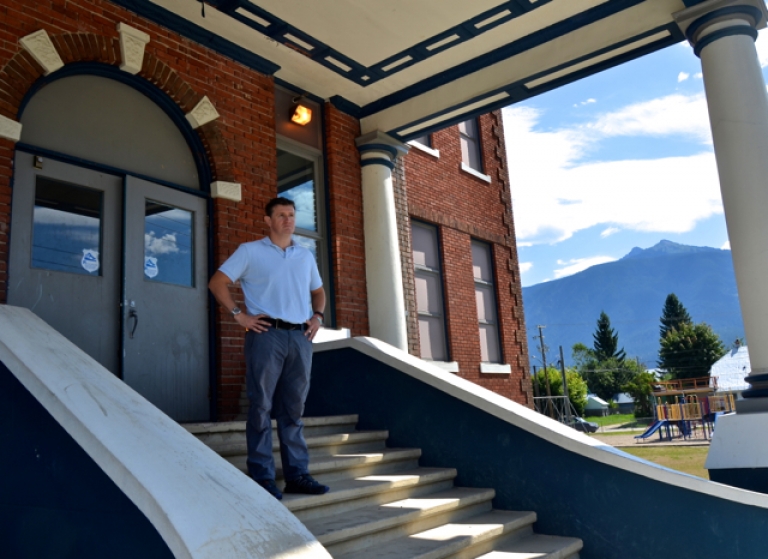 Gareth Jones is excited. And nervous. He’s got a lot riding on Revelstoke and not everything that happens is within his control.
That’s the beauty of business and the terrifying aspect of it.

You hop on the roller coaster and ride the lows and highs. Right now, it’s heading up. Revelstoke is simmering, the future of what could be clear in the minds of budding business owners in town. They’re sniffing out their opportunities and place to settle in to.

An example of vodka that may be produced at this new distillery. Photo: Jones Distilling

Hailing from near London, England, Jones says he’s an introvert and naturally was horrified when his marketing manager wanted to create the promotions for Jones Distilling around him as Mr. Jones. He thought people wouldn’t go for it, but a survey proved it was the best move. Something personable.

Jones’ foray into the world of craft liquor is in his lineage — almost folklore within his family. A relative knew a rogue cop who had confiscated an illegal distillery. Rather than let it fester in the evidence lock up, the equipment was stolen and used for another successful illegal distillery.

This was in the ’70s, and today, Jones finds his own quest for the perfect drop equally as time-consuming. He says his vodka will be on the same premium level as Belvedere and Grey Goose vodkas.

Heritage buildings are another passion for Jones. With an army background, he stumbled into the construction industry as a side gig where he has taken on a number of renovations.

He has big ideas for the old Mountain View School and is excited to get going, but buying an old heritage building is somewhat of a gamble. You don’t know what you’re going to get when you start stripping back the facade, and the interior condition could be good or bad news, with reflecting costs.

“If you don’t love these sort of buildings, you don’t get involved in them,” Jones said. “You have got to have a passion.” 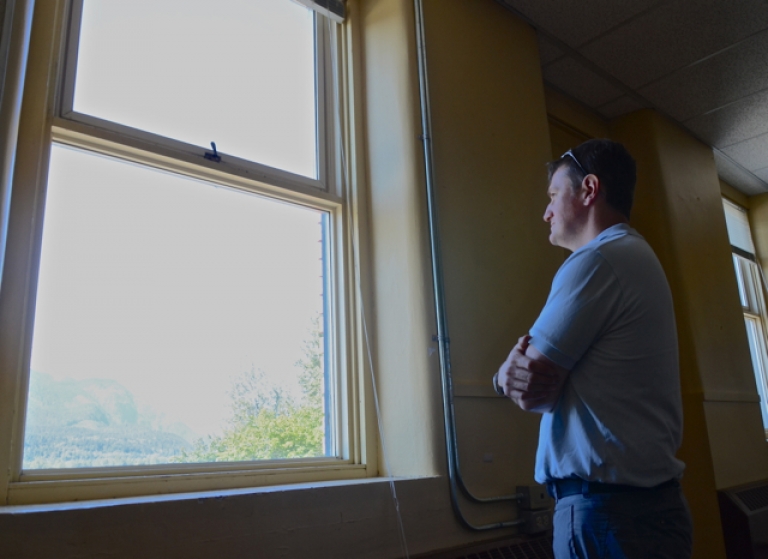 The total footprint of Mountain View School, with two storeys and a basement is 12,750 feet. It’s a huge renovation that will take time and Jones anticipates build-out for this development to be phased over a number of years.

The masonry building is positioned facing the Columbia River and features large windows on all exterior walls, allowing light to plunge in and shows stunning views of Mount Begbie and Revelstoke Mountain Resort on Mount Mackenzie. A grand staircase is situated in the centre of the building and runs between the three levels.

To start, Jones’ main goal is his initial plan — the craft distillery selling premium gin and vodka. Once that’s in place, he’ll later add a complimenting tasting room and restaurant. That’s all on the main floor. 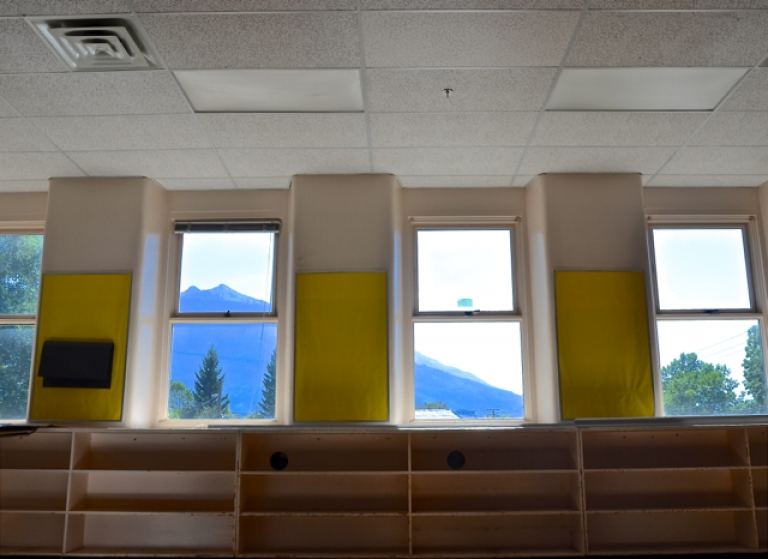 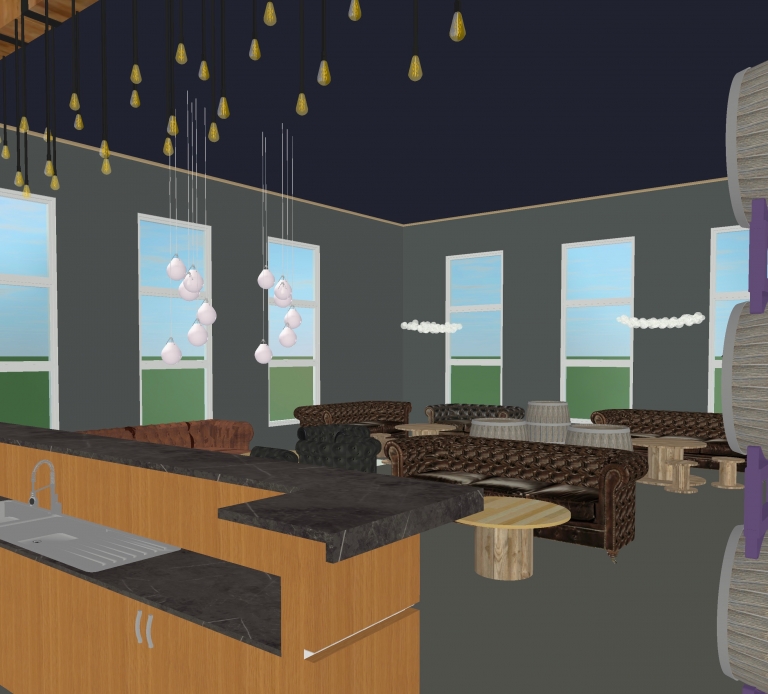 One of the designs for the tasting room which will then be developed into a bar. There will be spectacular views across Revelstoke to the RMR. Photo: Jones Distilling

Downstairs, as a completely separate entity, will be a medical centre. Jones has recruited his wife, who is a doctor, to help. He said the centre will grow organically as demand dictates and they’re interested in hearing from local doctors.

On the top floor, Jones plans to move his family in once it is renovated.

The responsibility of owning such an iconic building that’s part of Revelstoke’s history is clear to Jones. He said he’s not in any rush to get things done immediately and rather wants them to be right, in their own time.

“For me, the history of the building, the way it has been part of Revelstoke, and also woven into the fabric of the community for generations, you can’t put a price on it, it’s history,” he said. 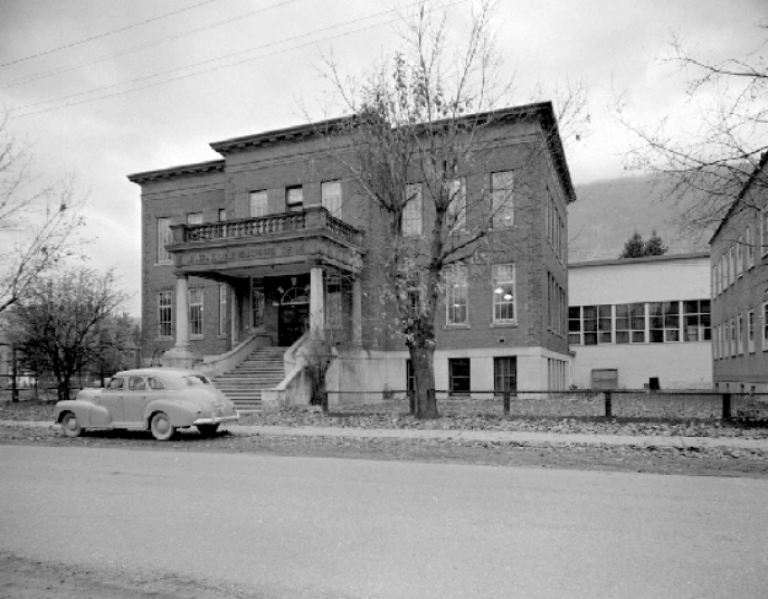 Jones is not the only one seeing the potential of craft distilleries in Revelstoke. Another business already underway, Monashee Spirits, is planning to open its doors in Mackenzie Avenue around March 2017.

Revelstoke may have a future tourism draw as a hub for premium liquor, with these two businesses and Mount Begbie Brewing Co’s expansion. But for now, Jones envisions the revitalized Mountain View School building as a social place, open to the public and with a nod to its history.

“I hope when our little distillery opens, it will be very small, very discreet and very high-end and people can come here and revel in the history of the place and have nice drink and relax,” Jones said.

Emily Kemp is a staff reporter for the Revelstoke Mountaineer. She’s an experienced news journalist with a background in daily newspapers and radio. Contact Emily by email at emily@revelstokemountaineer.com

In The Press: Ramada Inn