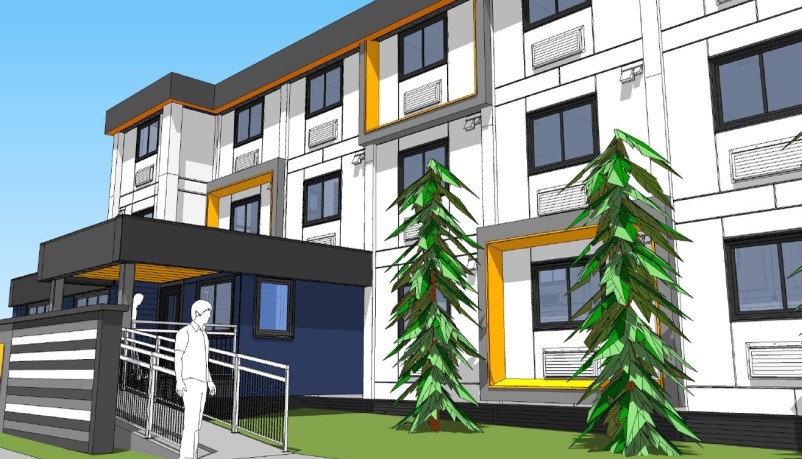 A concept sketch shows a modular housing building to be located at 650 West 57th Avenue in Vancouver. (Boni-Maddison Architects / City of Vancouver)

The City of Vancouver has approved the construction of 78 temporary modular housing units in Marpole, despite strong opposition from some area residents.

“Temporary modular housing provides safe and secure homes for our residents who have the greatest need. No person should be sleeping on the streets – or dying as a result,” Mayor Gregor Robertson said in a statement.

“The approval of this project is one way the city can quickly and effectively provide quality homes for our most vulnerable residents, especially as we enter the cold winter season.”

Director of Planning Gil Kelley said Monday the units will be built at the Pearson-Dogwood site at 7430 and 7460 Heather St., near West 59th Avenue.

The homes are part of the B.C. government’s $66-million commitment to building 600 modular housing units—a near-term solution to the homelessness crisis that has gripped Vancouver.

The project also fits within the city staff’s proposal to build 12,000 social housing units over the next 10 years.

While the initiative could help get hundreds of homeless people off the street, many locals have cited safety concerns as their reason for opposing the project.

Earlier this month, dozens of Marpole residents protested outside City Hall on three occasions, holding signs with messages such as a “kids’ safety first” and “right idea, wrong location.”

On Monday, however, the city said it has also seen strong support for the project and remains “committed to working with the community towards good stewardship of this site and the community in general.”

“We’ve seen many members of the community come forward, some with concerns about this project and others — including Marpole students, parents, business and faith leaders — who are strongly in support of the action we’re taking to address homelessness,” Robertson said.

“By working closely and collaboratively with our partners… we will make this project a success. We’ve done it before throughout the city.”

The city has also added several conditions to the development permit to address the concerns of local residents, including the oversight of a Community Advisory Committee made up of a cross-section of stakeholders in the community.

Modular housing consists of temporary structures that are prefabricated in sections and assembled on-site.

The units will be reserved for people who are homeless or living in shelters, those over 45 years old and people with disabilities. Fourteen of the 78 units will be fully accessible, the city said. The first building is set to open in February.

In September, Council approved amendments to the city’s zoning and development bylaw to streamline the process for proposed affordable housing projects.