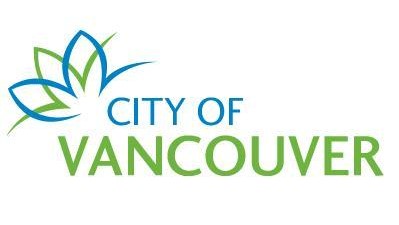 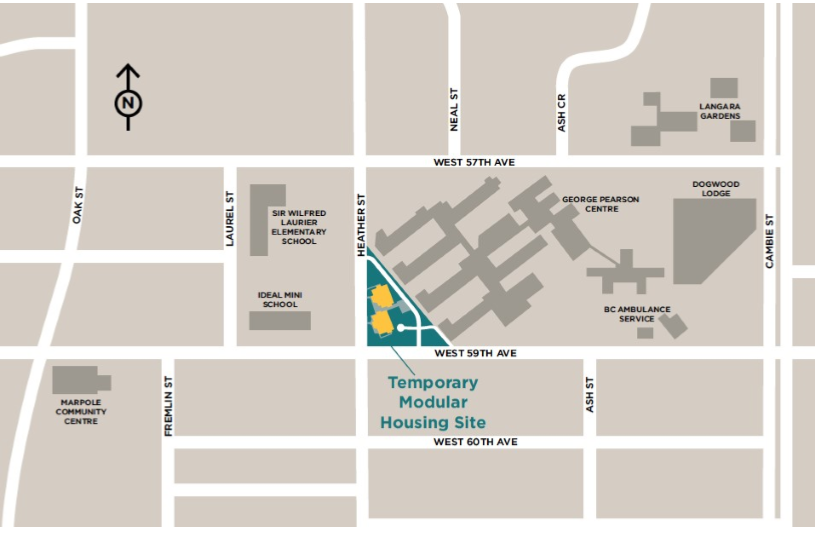 The units in the modular apartment building set to open in Marpole this month are small, just 250 sq. feet, but each will offer a homeless person their own small kitchen and bathroom with a shower stall.

Officials took journalists on a tour of the temporary apartment block, built of prefabricated units, that is nearing completion in the south Vancouver neighbourhood.

The city approved the 78 units of social housing at Heather Street and 59th Avenue last fall. Luke Harrison, CEO of the Vancouver Affordable Housing Agency, led the tour of one of the two buildings that Horizon North began building off-site in mid-October.

Each unit’s kitchen has a stovetop and microwave oven. Fourteen wheelchair-accessible units are about 25 sq. ft. larger.

The buildings both feature a 770 sq. ft. common area, dining space and shared laundry. The land was provided by developer Onni Group for a term of five years. 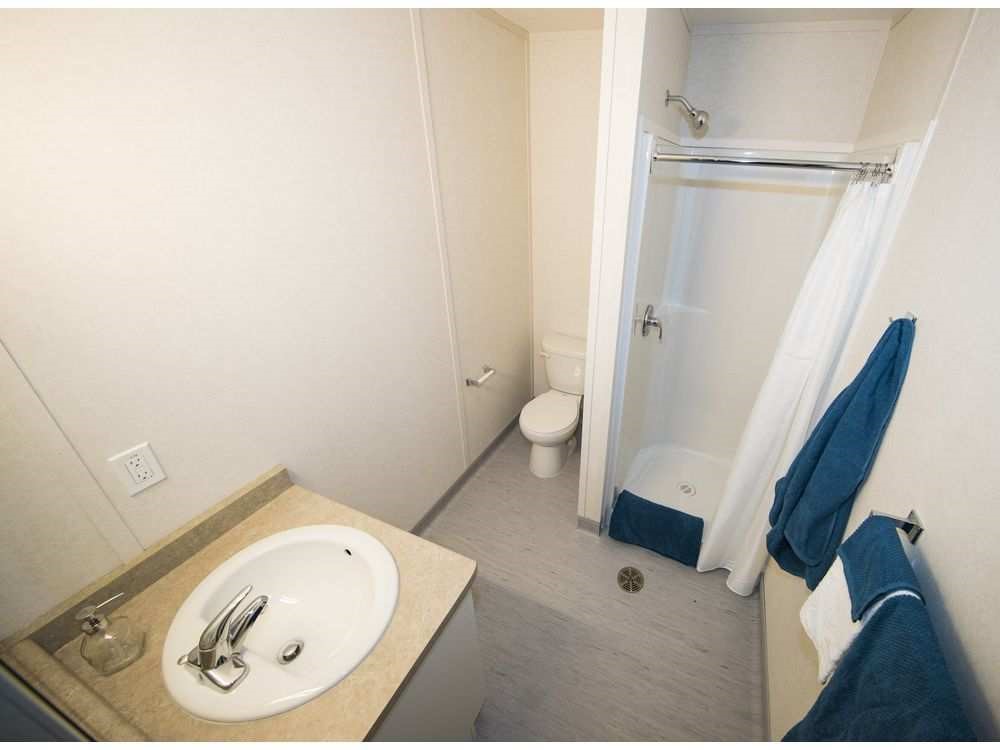 The bathroom in each tiny unit features a shower stall. Francis Georgian / PNG

Mayor Gregor Robertson said the primary goal of the temporary housing is to immediately address Metro Vancouver’s homelessness emergency — 3,605 people in the region at last count, including 2,138 in Vancouver — by bringing some of Marpole’s most vulnerable indoors. Tenants will be 45 years and older, people with disabilities and homeless living in the local neighbourhood.

“We are thrilled to see these buildings opening now,” Robertson said. 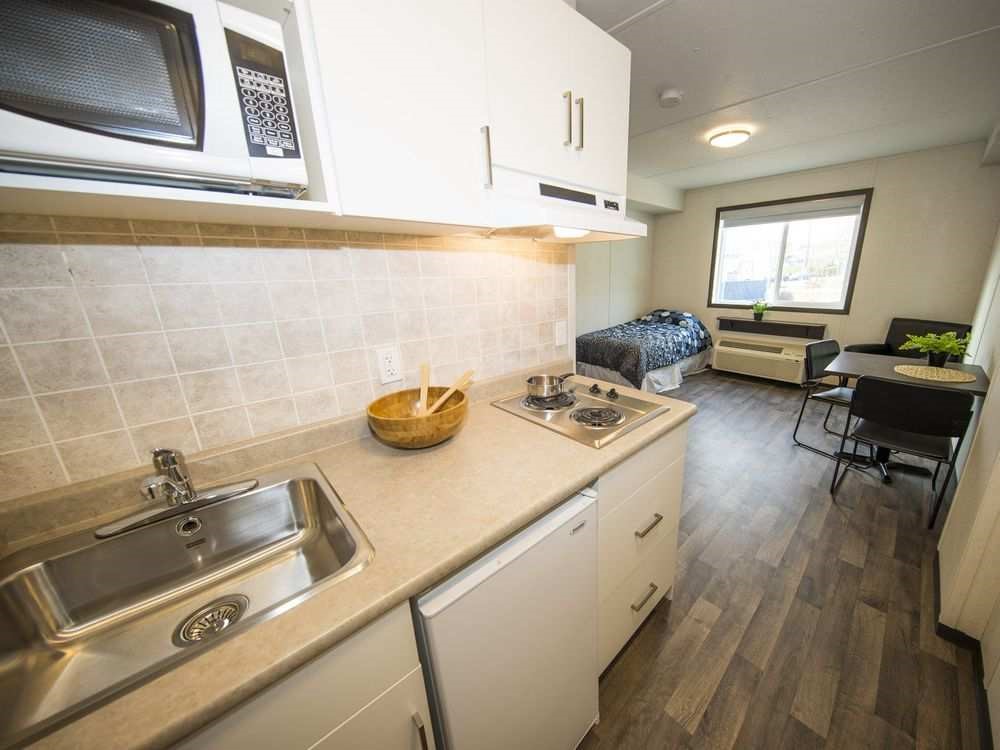 A unit inside the first building of a temporary modular housing project at Heather and West 59th in Vancouver, which is nearing completion. Francis Georgian / PNG

Provincial housing minister Selina Robinson said the goal of the housing is to bring stability to the lives of its tenants.

“We all know that no one should be without a home, without a safe, supportive environment,” she said. “Modular housing provides a meaningful and efficient response to people who are suffering, people who need help.”

Robertson acknowledged the furor that broke out in the community when the project was announced, much of it from locals who said they supported housing the homeless but not in their neighbourhood.

He chalked up a lot of the outrage to the spread of misinformation, despite the city’s efforts to reach residents through public info sessions and mail outs.

“We had a very aggressive timeline to get the housing open this winter,” Robertson said. “The challenge is with communications and making sure that accurate information gets out to the community. We can always do more.”

The buildings are across the street from Churchill’s Ideal Mini School and Sir Wilfrid Laurier elementary school, and a block from Sir Winston Churchill secondary. Four students from the high school who are outspoken supporters of the housing attended Saturday’s tour. Pastors who put together “welcome kits” for the tenants came, too.

Robertson commended the students and said the city and B.C. Housing are committed to ensuring the building works well with the community. Liaisons will be tasked with addressing any local concerns. Some locals came for a tour earlier in the week.

B.C. Housing is now vetting tenants, who are expected to start moving in before the month is over. 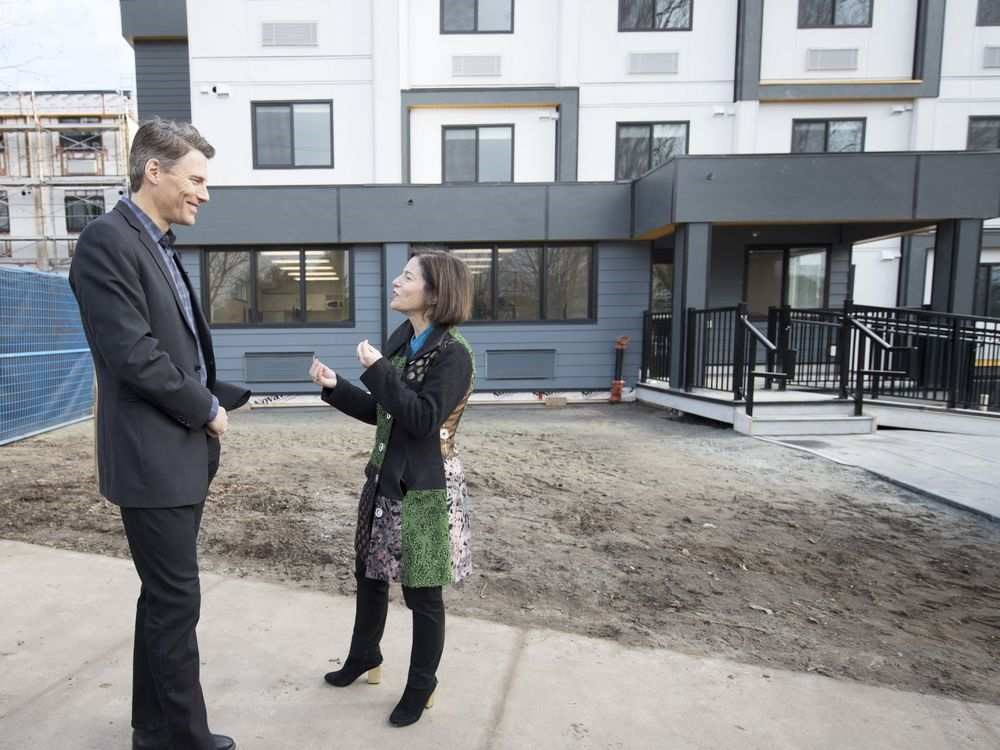 Robertson said the city will continue working to build 1,000 units of social and supportive housing by the end of 2018 and a total of 12,000 units over the next decade, ith temporary modular housing serving as a “stepping stone” to permanent housing.

“We’ve been on a very aggressive pace with the B.C. government,” he said. 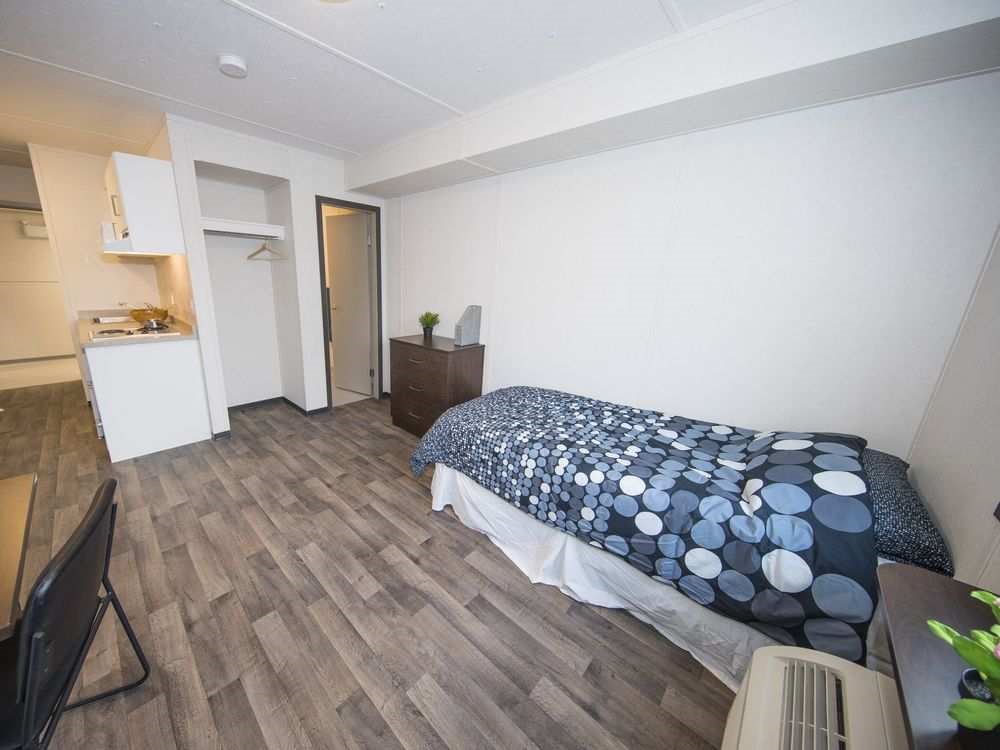 The 250 sq. ft units are basically one room with the small kitchen in the nook created by building the wall for the tiny bathroom. Francis Georgian / PNG

CORRECTION: An earlier version of this story incorrectly stated that the temporary modular housing is located “blocks away” from three schools. Two of the schools are across the street and the other is a block away.